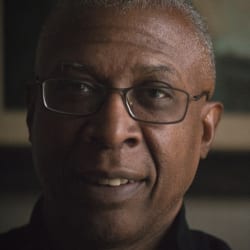 Joe Brewster and his partner Michele Stephenson are co-founders of the Rada Film Group, a media production company that creates non-fiction stories using installation, documentary and print media. Joe is a Harvard trained psychiatrist who has used his psychological training as the foundation to approach social issues he has chosen to tackle as an artist and filmmaker. Our work is an expression of our own personal mission to use visual storytelling to better understand our experiences as people of color navigating a variety of communities and society at large. We are passionate about the construction of diverse narratives using a complex visual toolbox. Our goal is to bring to life issues using the empathic voice of our characters at every opportunity during the filmmaking process. These include but are not limited to pre-production, fundraising (crowd funding campaigns), marketing, distribution and outreach campaigns. In our work we try very hard to avoid clichés about our communities and continually scratch beneath the surface to where answers are not always easy. We use the art form to explore our ambivalence about issues and question our own and our subjects’ points of comfort. It is in those grey areas that art is created and where change can be affected for us as individuals as well as for the constantly shifting communities we reside in. Joe and Michele’s most recent film, American Promise, was nominated for three Emmys including Best Documentary and Best News Coverage of a Contemporary Issue. The film also won the Jury Prize for Excellence in Filmmaking at Sundance, was selected for the New York Film Festival's Main Slate Program, and won the African American Film Critics Association Best Documentary Award. The film was a recipient of fellowships and grants from the Sundance Institute, the Tribeca Film Institute, BAVC, the Ford Foundation and the MacArthur Foundation. American Promise was broadcast on PBS’s POV: AMERICAN DOCUMENTARY series to the largest documentary rating in the 2013 season largely due to a 2 year long outreach campaign supported by Kellogg, Open Society Foundations, the Annie E. Casey Foundation, and The Arthur M. Blank Family Foundation. The campaign received numerous awards including a Media That Matters Impact Award, and a Revere Award nomination by the American Publishers Association for its professional development modules created with Teaching Tolerance. Promises Kept: Raising Black Boy to Succeed in School and in Life, written by Joe and Michele along with co-author Hilary Beard, won a 2014 NAACP Image Award for Outstanding Literary Work. A huge milestone in 2014, American Promise received the BRITDOC Puma Impact Award, which recognizes documentary films that have had the greatest impact on society. In 2015, in collaboration with the New York Times Op-Docs, and as part of a multi-racial filmmaker collaborative, Joe and Michele have been producing and directing a series of short documentaries in the hope to spawn a deeper national conversation on race relations. Currently they are producing and directing Hispaniola and The Nikki Giovanni Project; In Praise of the Feet (working title). Using magical realism storytelling techniques, Hispaniola explores the personal impact of the 2013 Dominican Republic Supreme Court decision that strips citizenship from Dominicans of Haitian descent, including citizens living in the country for generations. The Nikki Giovanni Project uses a non-linear impressionistic narrative to interweave the life and loves of poet and activist Nikki Giovanni. Joe and his partner Michele live and work in Brooklyn with their two sons. @2joedigital Joe Brewster’s personal twitter handle @radafilmgroup production company twitter handle Photograph credit: Ayana Enomoto Hurst