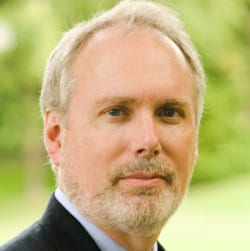 Joel F. Harrington is a historian of Europe, specializing pre-modern Germany, with particular interest in social, religious, and legal topics. His most recent book is Dangerous Mystic: Meister Eckhart’s Path to the God Within (Penguin Press, 2018). His previous monograph, The Faithful Executioner: Life and Death, Honor and Shame in the Turbulent Sixteenth Century (Farrar, Straus & Giroux, 2013), has been translated into twelve languages and was named one of the Best Books of 2013 by The Telegraph and History Today. Other publications include The Unwanted Child: The Fate of Foundlings, Orphans, and Juvenile Criminals in Early Modern Germany (University of Chicago Press, 2009), winner of the 2010 Roland H. Bainton Prize for History; Reordering Marriage and Society in Reformation Germany (Cambridge University Press, 1995; paperback 2005), one of Choice’s Outstanding Academic Titles of 1996; The Executioner’s Journal (University of Virginia Press, 2016); and A Cloud of Witnesses: Readings in the History of Western Christianity(Houghton Mifflin, 2001). His project for the Guggenheim is a study of the sixteenth-century mercenary Hans Staden, who published an influential account of his captivity among the Tupinambá of Brazil, including graphic accounts of ritual cannibalism.

Harrington is a graduate of the University of Notre Dame (B.A. 1981) and the University of Michigan (Ph.D. 1989). Previous awards include fellowships from the Fulbright-Hayes Foundation, the National Endowment for the Humanities, the German Academic Exchange Service (DAAD), and the American Philosophical Society. He has lectured widely in North America and Europe and he has resided as a visiting fellow at the American Academy in Berlin, Herzog August Bibliothek (Wolfenbüttel), Institut für Geschichte der Medizin (Universität Erlangen-Nürnberg), and Clare College (Cambridge).