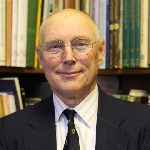 Educated at Tufts (B.S., mechanical engineering, 1963) and Yale (M.S., 1963; Ph.D., 1968), Dr. Whitehead spent three years as a postdoctoral fellow (1968–69) and then Assistant Geophysicist (1969–71) at UCLA’s Institute of Geophysics and Planetary Physics before accepting a position as Assistant Scientist at Woods Hole Oceanographic Institution, where he remained until his retirement in 2007 as Senior Scientist Emeritus. During his long career, his research, including that conducted during his Guggenheim Fellowship, focused on understanding the complex fluid mechanics of the oceans and planetary interiors through the use of laboratory experiments, fluid dynamics theory, and an occasional ocean cruise. In addition, he was an instructor in the MIT-WHOI Joint Program, a highly selective graduate degree program in marine science.

A jogging enthusiast and marathon runner, Dr. Whitehead and his wife, Linda Dow Whitehead, live in Falmouth, Massachusetts, where they raised their three children and where Mrs. Whitehead served the community as a music teacher and department chair in the Falmouth Public Schools until her retirement in 2010. For over 30 years she was the conductor of the Falmouth Town Band, the largest in New England, and he played the trombone and was stage manager.

Follow this link to visit the webpage for the Geophysical Fluid Dynamics Laboratory.