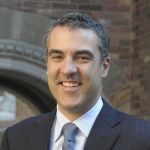 John Fabian Witt is the Allen H. Duffy Class of 1960 Professor of Law at Yale Law School. He is the author of widely acclaimed work in the history of American law, including Patriots and Cosmopolitans: Hidden Histories of American Law (Harvard UP, 2007), which explores law and nationhood at key moments in American history from the Founding to the Cold War, and the prizewinning book The Accidental Republic: Crippled Workingmen, Destitute Widows, and the Remaking of American Law (Harvard UP, 2004), which describes the impact of industrial accidents on American law and public policy at the turn of the twentieth century. His articles have appeared in the Columbia Law Review, The Harvard Law Review, The Yale Law Journal, and other scholarly journals. His writing has appeared in The New York Times, Slate, and The Washington Post. He is currently writing a book on the laws of war in American history from the Revolution to the turn of the twentieth century. Professor Witt is a graduate of Yale Law School and Yale College and he holds a Ph.D. in history from Yale. Before joining the faculty at Yale, he was the George Welwood Murray Professor of Legal History at Columbia University. He served as a law clerk to Judge Pierre N. Leval on the United States Court of Appeals for the Second Circuit.