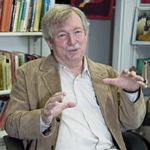 I was born and raised in San Francisco and Kailua, Hawaii.  As a result, I developed many friendships with people of Asian origins during my youth, and consequently I cultivated a curiosity about Asian cultures.  I completed my undergraduate education at Gustavus Adolphus College in St. Peter, Minnesota, as a history major, writing a senior thesis on Ho Chi Minh.  The American War in Vietnam was at its apex during my years in college, and I came to believe it was important for Americans to understand the histories and cultures of Southeast Asia.  Immediately following my undergraduate liberal arts education was completed in 1970, I began to study Hinduism and Buddhism seriously while earning a master’s degree at the Graduate Theological Union in Berkeley, California, in 1973, before entering the history of religions Ph.D. program at the University of Chicago.  I have been a member of the faculty at Bowdoin College since 1978, but I have also taught and researched in Sri Lanka for six years, in Hong Kong for one, and have spent eight months each in Laos and Japan, while making shorter two three-month research and writing forays into Cambodia and Burma.  These years of experience in Asian cultures have given me an eye for the vitality and diversity of “lived religious traditions.”

In the earlier phases of my research and writing, my concentration was trained on the translation and interpretation of Theravada Buddhist texts, efforts that lead to the publication of Discipline:  the Canonical Buddhism of the Vinayapitaka (1981) and The Anagatavamsa Desana:  the Sermon of the Chronicle-To-Be (1992), both published by Motilal Banarsidass in Delhi.  My interests and approach to Buddhist religious culture was seriously impacted, however, when I witnessed the Sinhala pogrom against Sri Lanka’s Tamil minority in 1983, and then the rural Sinhala insurrection led by the Janata Vimukti Peramuna (JVP) in 1989, an insurrection that was, in turn, met by a brutal suppression by Sri Lankan government security forces.  Both of these watershed collective acts of violence, seemingly born out of the rising specters of religio-ethnic identity and class-consciousness, articulated ethics of exclusivity and militant confrontation.  Consequently, a theoretical subtext for writing Buddha in the Crown: Avalokitesvara in the Buddhist Traditions of Sri Lanka (Oxford UP, 1991), The Religious World of Kirti Sri:  Buddhist Art and Politics in Late Medieval Sri Lanka (Oxford UP, 1996), The Buddhist Visnu (Columbia UP, 2004), and The Sri Lanka Reader: History, Politics and Culture (Duke UP, 2011), has been to emphasize the manner in which the historical arc of Sinhala religious culture had been preponderantly, if not emphatically, assimilative and inclusive in character, at least before the middle of the twentieth century when nationalist stirrings changed the political dynamics of the Sri Lankan populace.  In those books (two of which have been translated into Sinhala), I argued that the nature of contemporary social and political unrest in Sri Lanka has been a recent historical anomaly, a permutation brought about by the exigencies of profound economic and political change.  A related theme pervades two of my later studies, Spirits of the Place:  Buddhism and Lao Religious Culture (University of Hawaii Press, 2009) and Theravada Traditions:  Buddhism and Ritual Cultures in Sri Lanka and Southeast Asia (forthcoming), books in which I have examined how a reflexive relation obtains between transformations of political economies on the one hand and concomitant changes in religious cultures on the other.

In my current study supported by the Guggenheim Foundation, I examine the religious grammar and vocabulary of violence that has been perpetrated and rationalized by militant Buddhist extremists against Muslim minority populations in Sri Lanka and Burma.   By “religious grammar,” I mean the manner in which rites, rhetoric, and symbols are deployed to enact and to justify confrontations between these religious communities.  That is, I am attempting to ascertain the roots and means for violent articulations of exclusivity among certain sections of the Buddhist community while I also ascertain how representative Muslim communities in Sri Lanka and Burma have responded to these attacks.  In addition to an analytical and historical reprise, my study seeks to complicate how Euro-American stereotypes of Buddhists (as thoroughgoing peaceful peoples), and Muslims (as radical “jihadists”) are misconceived constructions, at least within these contemporary social and political contexts in South and Southeast Asia.