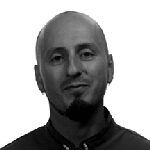 John Jota Leaños is a media artist and social-art practitioner focusing on critical convergences of history, memory, social space, and decolonization. Leaños’ animation, installation, public art, and performance fuse traditional art practices and aesthetics with new technologies and contemporary interpretations. Currently an Assistant Professor of Social Documentation at the University of California, Santa Cruz, in the Department of Film and Digital Media, Leaños is a Creative Capital Foundation Grantee (2002) who has received, among other honors, the United States Artist Fellowship (2011), San Francisco Art Commission Individual Artist Grant (2011), Irvine Foundations Creative Connections Grant (2009–2010), the National Association for Latino Arts and Culture (NALAC) Artist Award (2009), The MAP Fund Award(2009), the Creative Work Fund Award (2007, 2000), Center for Arts and Society Fellowship, and an artist’s residency at the Center for Arts and Society at Carnegie Mellon (2002–2003).

Trained as a photographer, Leaños also works in art installation. His installation Remembering Castration: Bloody Metaphors in Aztlán debuted at the Whitney Museum of American Art’s 2002 Biennial. Other conceptual, sculptural, and video installations have been shown at venues such as Arte Interactiva Biennial, Merdida, Mexico (2009, 2007), the Oakland Museum (2007, 2006), Art in General, NYC (2003), Massachusetts Institute of Technology (2001), and Museo del Barrio in New York (1999), and Yerba Buena Center for the Arts in San Francisco (1998). His 1968 Chevy Impala lowrider media installation, El Muertorider, will be at the Museum of Contemporary Art, Chicago, in 2012. Leaños also produced radio-installation works at the Yerba Buena Center for the Arts in San Francisco (2008) and the Oakland Museum (2007). He also streamed radio programming created by artists and Oakland youth for the Neighborhood Public Radio (NPR) installation at the 2008 Whitney Biennial.

From 2000 to 2004, Leaños was a third of artist collective Los Cybrids: La Raza Techno-Críitca, critically engaging high technology from Latino perspectives. Los Cybrids performed at the Museum of Contemporary Art in Los Angeles (2002), the San Francisco Museum of Modern Art (2001), the Galería de la Raza (2002), and in the streets. Their performance El World Brain Disorder:surveillance.control.pendejismo toured galleries and universities, including Carnegie Mellon, Brown University, and the University of San Francisco (2003).

As a community artist, Leaños has been involved in mentorship, education and collaboration with youth, young artists, and non-art related sectors. He gives workshops and lectures at universities, schools, and community sites throughout the United States on a broad range of topics. As a curator and working artists, Leaños established in 2000 the ongoing Digital Mural Project  with Carolina Ponce de León at the Galería de la Raza. Most recently, he curated the exhibition Home After Dark: Recent Works by Emerging Latina/o Artists (2011) at the Galería de la Raza in close mentorship to a new generation of Latina/o artists.

Of Mexican-Italian-American descent, Leaños received his M.F.A. in Photography from San Francisco State University in 2000. He has taught as an artist-in-residence at Carnegie Mellon University in the Art Department (2003) and at the University of California, Santa Barbara, in the Center for Chicano Studies (2005–2006). Leaños was an Assistant Professor of Chicana/o Studies at Arizona State University from 2003 to 2007 and an Assistant Professor of Social Practices and Community Arts at the California College of the Arts from 2007 to 2009.