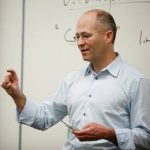 John Plotz is Professor of English at Brandeis University, specializing in Victorian literature and the novel. He received his B.A. (1989; History and Literature) and Ph.D. (1997; English) from Harvard University. His brief stay as a student of early modern literature at Cambridge University was cut short in March 1990 when he went to Czechoslovakia to teach English and watch the Velvet Revolution unfold. He was an assistant editor at Tikkun magazine in San Francisco, 1990-91.

His Guggenheim project, Semi-Detached: The Aesthetics of Partial Absorption, is about what it means to get partially drawn into a work of art. In it he asks: When you’ve half lost yourself in a book, what happens to the half left behind? Artworks are like virtual worlds, which allow their audiences to feel that they are simultaneously inside and outside an artwork: both in an art gallery looking at a painting, and somehow within the world that painting depicts. Plotz compares 19th-century ideas about the partial immersion produced by novels, poems, and panoramas to modern-day versions of world-blocking absorption: Second Life, online gaming, even texting and Facebook-checking. The project includes work on J. S. Mill, Lawrence Alma-Tadema, George Eliot, William Morris, Henry James, Edmund Wilson, Hannah Arendt, and Erving Goffman.

John Plotz has been a Fellow at the National Humanities Center (2001-2), and of the Howard Foundation (2005-6) and is currently a residential fellow at the Radcliffe Institute for Advanced Study (2011-12). He is the author of The Crowd: British Literature and Public Politics (California, 2000) and Portable Property: Victorian Culture on the Move (Princeton, 2008; named a Choice Outstanding Academic Title). His honors include the Brandeis University Dean of Arts and Sciences Mentoring Award for 2006-7.

Mr. Plotz's most recent research on Semi Detached was just published in an article in Slate.  Follow this link to read the article.