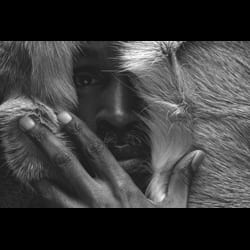 John W. Love, Jr. traverses literature, performance, installation, video, and new media in the creation of worlds defined by blurred lines, glimmering ephemera, and Absurdist kisses to the psyche. As characters yawn at the banality of realness and laugh in the face of truth, our cultural ists and isms are turned inside out in an entralled navigation of sex, money, power, beauty, identity, humor, and the keen of silence.

Discovered during his Rasmuson Foundation residency at the Anchorage Museum, Love’s anthropologist of the ridiculous and the Absurd, The Gem Collector, brings wry observation to Ooo girl, Anchorage! (video) and Float ~ head work (performance). The half-lidded side-eye cuts with equal intrigue when HB2 is looked squarely in the genitals in the sound installation SALT DADDY, and as America’s history of lynchings and the blue brutality of the 2016 Charlotte uprisings are paralleled in the nail-laden gris gris/sculpture Bound In Yes (McColl Center for Art + Innovation, NC; Without Sanctuary, Prickly Conversations – Levine Museum of the New South).

In FECUND The Perpetually Pregnant Man gave birth to an entire world of Yes. Now, coinciding with Love’s tenure as a NC Artist Council Visual Artist Fellow, works are emerging from the mystic’s postpartum moment that have inspired him to abandon his magnificently surreal home after having made the cataclysmic decision that today is the day he will unravel his most insidious thought.

Theatre, film, television, documentary, social practice, and the ever expanding web space have brought Love and his work to Sweden, Belgium, Germany, Paris, Alaska, New York, LA, the Bay Area, the Southeast, the Pacific Northwest, and points beyond.

I am a blurred line.

The process of working often leads to works defined as literature, performance, installation, film/video, theatre, media, mysticism, etc. The allure for me however has always been in what remains ungraspable.

When a wind rolls through with a little more bite than usual or it is clear the residue of a dream plans to cling indelibly these are moments I refer to as the tug. They are beyond a casual fictive transparency looking to be applied to something else. They are actually narrative sui generis aching to be exposed…rescued even. So that’s what I do. I rescue narrative.

Curled up in the perpetual tussle between medium and craft and the navigation of the human condition, I smear boundaries and blur lines of demarcation not because I’m being a cryptic asshole but because the definitions all fit like a fat man in a toddler’s big girl dress.

Hell, even that gorgeous disaster is a narrative I take pleasure in entertaining.

Media Links:
fecund: Night redux
2016 (recut)
07:51
concept, director, producer, writer, performer
“In a world where everything is a spell and everything is a gris gris, The Fecund come exquisitely and often at night.” FECUND (interdisciplinary work); “The Diaries of Neequa or She Who Would Be King” (live performance), Mint Museum of Art Uptown, Charlotte NC.

Ooo girl, Anchorage!
2016(recut) 16:14
concept, director, producer, writer, performer, camera
Video and social media documentation of a foray into the Great North as well as the creation of The Gem Collector: Anthropologist of the Ridiculous and the Absurd who collects toothy little gems of human behavior. Rasmuson Foundation/Anchorage Museum Residency, Alaska, 2014.