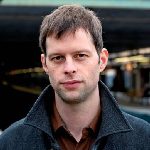 John Wray was born in Washington, D.C., in 1971. His three published novels, The Right Hand of Sleep, Canaan's Tongue and Lowboy, have earned him numerous distinctions, including a Whiting Award, a KEN fiction award, and the 2010 Mary Ellen Van der Heyden Prize from the American Academy in Berlin. In 2007, Granta included him on its list of best American novelists under the age of 35. In addition to writing fiction, Wray is a regular contributor to Esquire, Spin, and The New York Times Magazine.