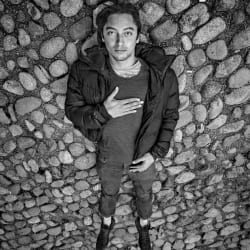 Jonas Carpignano is a writer/director who spent his childhood between Rome and New York City. His work has been shown in prestigious film festivals including Cannes, Venice, and the New York Film Festival. His two short films A Chjàna (2011) and A Ciambra (2014) have won many international awards including the Controcampo Award at the 68th Venice Film Festival, The Discovery Award at 2014 Cannes Film Festival and a Nastro d'Argento Special Mention from the SNGCI.

He is best known for directing the feature film Mediterranea, which had its world premiere at the 2015 Cannes Film Festival (Semaine De La Critique). Since then, the film has screened at festivals around the world such as BFI London Film Festival, AFI Fest and Stockholm Film Festival where the film won three awards including Best Debut Film and Best Actor. Mediterranea was nominated for three Film Independent Spirit Awards (Best Actor, Best First Film, Best First Screenplay) and it earned Jonas the Bingham Ray Breakthrough Director Award at the IFP Gotham Film Awards. The National Board of Review gave Jonas the award for the Best Directorial Debut of 2015 and named Mediterranea as one of the Top Five Foreign Language Films of the year. Mediterranea was a New York Times Critics’ Pick.

Jonas is currently in development on his second feature film based on A Ciambra. The film has already been supported by the Cannes Cinefondation Residence du Festival, the Torino Film Lab, the Sundance Institute and the Semaine De La Critique's Next Step program.