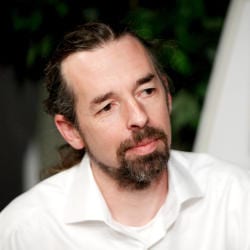 Jonathan David Bobaljik’s work in linguistics combines theoretical morphology and syntax with descriptive work on endangered languages. He has a special focus on Itelmen and other indigenous languages of Kamchatka, Russia, where he has spent extended periods engaged in linguistic field work. Bobaljik’s recent work approaches questions of universals of language from the perspective of theoretically-informed, large-scale cross-linguistic surveys. His book Universals in Comparative Morphology (MIT Press, 2012) provides a detailed investigation of the morphology of comparative and superlative expressions, especially those that are irregular within a given language (such as ‘good-better-best’, where the comparative form is unrelated to the basic form of the adjective). Careful investigation of this small corner of grammar reveals a wealth of abstract patterns, shared among all languages studied, which hint at some of the organizing principles that shape how languages are represented in the mind. The work was awarded the Linguistic Society of America Leonard Bloomfield Book Award.

Bobaljik completed a PhD at the Massachusetts Institute of Technology and was subsequently a Junior Fellow at Harvard University. After teaching at McGill University he moved to the Department of Linguistics at the University of Connecticut where he is currently Professor and Department Head. He is a recipient of a Friedrich Wilhelm Bessel Research Award from the Alexander von Humboldt Foundation and a fellow of the Linguistic Society of America.