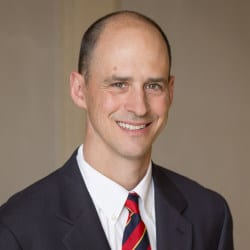 Jonathan Ebel is an associate professor in the Department of Religion at the University of Illinois, Urbana-Champaign. He specializes in the religious history of the United States, and has written on the role religion plays in shaping American soldiers’ war experiences and the nation’s war memories. Ebel received his B.A. from Harvard in 1993 and his Ph.D. from the University of Chicago in 2004. He served as a naval intelligence officer from 1993 – 1997, and continued in that capacity in the naval reserves until 2005.

Ebel is the author of G.I. Messiahs: Soldiering, War, and American Civil Religion (Yale, 2015) and Faith in the Fight: Religion and the American Solider in the Great War (Princeton, 2010). He also co-edited From Jeremiad to Jihad: Religion, Violence, and America (California, 2012) with Professor John Carlson of Arizona State University.