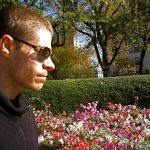 Jonathan Pieslak (b. 1974, Wilmington, Delaware) teaches music at The City College of New York and the Graduate Center, CUNY. A graduate of Davidson College (B.A., 1996) and the University of Michigan (M.M. 1999, M.M. 2002, Ph.D. 2003), Jonathan has published work in the top music journals on topics including critical theory, popular and metal music, and music and war. He is the author of the first interview-based book to explore the relationship between American soldiers in Iraq and music, Sound Targets: American Soldiers and Music in the Iraq War (Indiana UP, 2009). In 2006, he founded the American Soldiers on Music project, which makes many of his soldier interviews available for listening.

Also a composer, Jonathan’s music has been performed and broadcast throughout the United States and internationally, receiving awards from the American Academy of Arts and Letters (2006 Goddard Lieberson Fellowship for “mid-career composers of exceptional gifts”), Jerome Foundation, and the American Composers Forum, among others. His orchestral works were recorded by the Kiev Philharmonic. Jonathan’s most recent music project is “baby chic is a saucy beast.”

The Guggenheim Fellowship will support his research on music in extremist culture.