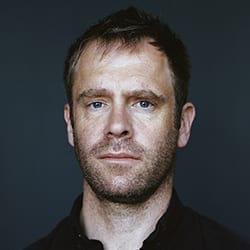 Jono Rotman (born 1974, Wellington, Aotearoa New Zealand) is an artist working in Aotearoa, New Zealand and the US. He lives in San Francisco. Rotman’s work has been exhibited and is represented in collections in the US, Europe, and Australasia. He received the Marti Friedlander Photographic Award in 2013 and is the recipient of the Prix Du Livre Images Vevey (2018) for his monograph Mongrelism (2018 UK, CH).

Rotman’s work is predicated on the idea that civilization is a delicate fiction. His practice focuses on the point at which different power structures meet: during the colonial process or at the collision of civilization and the natural world, for example. This often draws him to subjects on the edges of society. In Aotearoa, New Zealand, his work has explored incarceration and gangs, leading to an interrogation of his own place, as a New Zealander of European descent, in the colonial history of the country. In the US, he touches on similar themes, exploring the shifting violent ingredients of the American empire.