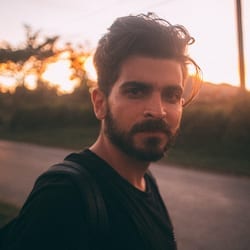 Jorge Thielen Armand is a Venezuelan-Canadian filmmaker. He is an alumnus of the Venice Biennale College, TIFF Studio, Berlinale Talents and Concordia University in Montreal, where he obtained a BA in Communication Studies.

His films have been presented at the Venice International Film Festival, IFF Rotterdam, Busan, the London Institute of Contemporary Arts, the Istanbul Biennial, Filmfest München, BAFICI, Gijón, Cairo, Guadalajara, the Museum of the Moving Image in New York, and many other venues.

His first feature film LA SOLEDAD (2016) premiered in Venice and showed at more than 60 festivals, receiving over a dozen awards. His second feature film LA FORTALEZA (2020) premiered in Tiger Competition at Rotterdam and won 8 awards in festivals of 2020, notably the Jury Prize of Biarritz Amérique-Latine which was assigned by Nicole Brenez.