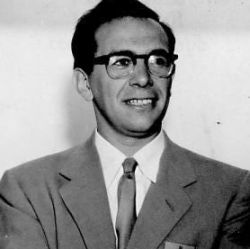 Josef Eisinger was born in Vienna, Austria, and following the tumultuous years of emigration and war, he found himself in Canada.  After service in the Canadian Army and a stint with the Dominion Observatory where he tracked the meanderings of the Earth’s magnetic pole, he acquired a thorough grounding in mathematics, physics, and astronomy at the University of Torornto.  He won a graduate teaching fellowship at MIT where Professor Jerrold Zacharias introduced him to atomic beams, a remarkably beautiful and powerful experimental technique.  Eisinger used it to investigate the internal structure of atomic nuclei and obtained his Ph.D. in 1951.   After a brief postdoctoral appointment at Rice University, he spent the next thirty years in the basic research area of Bell Laboratories, where his research interest shifted from physics to molecular biology.  This transition was greatly aided by his Guggenheim Fellowship in 1963 that let him gain experience in molecular biological techniques.  Most of his research work was academic in nature, published in professional journals, and some of it led to the development of useful medical devices, for example, the hematofluorometer for diagnosing lead poisoning.  Eisinger collaborated in epidemiological studies of lead-exposed populations that verified the efficacy of these instruments.  That experience piqued his interest in the history of medicine and he was awarded his second Guggenheim Fellowship in 1977 that allowed him to pursue his research into the long and tortuous history of lead disease.

After the demise of the illustrious AT&T Bell Laboratories, Eisinger continued his biophysics researchwork as professor at the Mount Sinai School of Medicine in New York, and following his retirement in 1998, his scholarly interest shifted to history, once again.  He assisted his wife, Styra Avins, in her research in music history and contributed translations and transcriptions of several hundred letters of Johannes Brahms to her notable work, Johannes Brahms. Life and Letters (Oxford UP, 1997).  He also wrote critical reviews of a theory of Beethoven’s cause of death, and most recently, Eisinger watched over the publication of his biographical book Einstein on the Road (Prometheus Books, 2011), which is based on the candid travel diaries that Einstein kept while on his various far-flung voyages between 1922 and 1933. Eisinger's Einstein at Home (Prometheus Books) and his Flight and Refuge: Reminiscences of a Motley Youth (Amazon) appeared in 2016.