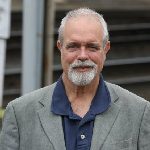 Joseph Millar's  three collections are Overtime (2001), Fortune (2007), and Blue Rust (2012) from Carnegie-Mellon. Millar grew up in Pennsylvania, attended Johns Hopkins University, and spent thirty years in the San Francisco Bay area working at a variety of jobs, from telephone repairman to commercial fisherman. It would be two decades before he returned to poetry. His poems record the narrative of a life fully lived among fathers, sons, brothers, daughters, weddings and divorces, men and women. His work has won fellowships from the National Endowment for the Arts and a 2008 Pushcart Prize and has appeared in such magazines as DoubleTake, TriQuarterly, The Southern Review, Tin House, American Poetry Review, and Ploughshares. In 1997 he gave up his job as telephone installation foreman to try his hand at teaching. Millar is now core faculty at Pacific University’s Low Residency MFA and lives in Raleigh, North Carolina, with his wife, the poet Dorianne Laux.