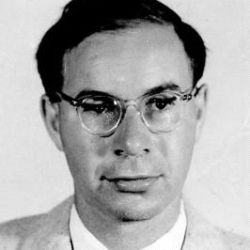 My Guggenheim Fellowship supported my work with Professor Rudi Peierls at the University of Birmingham, England. There I interacted with many European physicists, and wrote a first draft of my first book, titled Nuclear Photodisintegration. I spent my second sabbatical leave (from RPI, 1972-73) at Orsay, a branch of the University of Paris. My lectures there were the first draft of my monograph on two and three body problems.

I started research in 1941 as an experimental nuclear physicist working on the cyclotron. I used part of this work for a secret M.S. in physics. I switched to theoretical nuclear physics, working in that field from 1946 to 2000, studying nuclear disintegration, including the quasi-deuteron model, the scattering of energetic electrons by nuclei and systems of few nucleons. I was able to combine the threads of these divers research areas in my last paper, titled “Fifty Years of the Quasi-Deuteron Model,” which was published in Nuclear Physics (A699, 255c) in 2002.

I travelled extensively, both to participate in physics conferences, and as a tourist. Of course, my two sabbaticals gave me opportunity for a great deal of European travel. I went to four conferences in the Soviet Union (1967, 1988, 1992, and 1994). I visited many countries in Europe, Asia, Africa, and Central and South America. I went to Guatemala as a “human rights tourist,” a member of delegations organized by Peace Brigades International (1993, 1994, 1996).

I recently wrote a memoir titled Progress. I include my experiences and my opinions on a variety of subjects—pedagogy, physicists, physics, and politics.