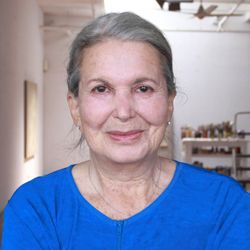 Judith Murray, who lives and works in New York City and Sugarloaf Key, Florida, began her career with a groundbreaking solo show at the historic Betty Parsons Gallery in 1976. John Perreault of the former Soho News called Murray a true “non-conformist artist” in a full-page review of that show.

Over her nearly five-decade career, Murray has produced a wide-ranging oeuvre, while strictly adhering to certain constants within her practice. Working primarily in oil on linen canvases, Murray has consistently demonstrated her abilities as a colorist, skillfully mixing her refined palette of red, yellow, black and white into an infinite range of rich hues. She has traveled extensively, from the jungles of South America to the temples of Asia, and believes her quartet of base colors represents a primary universal palette.

Judith Murray has exhibited extensively in the U.S. and abroad, including solo shows at the legendary Clocktower, New York; MoMA PS1, New York; and the Dallas Museum of Fine Arts. Her paintings have been included in more than thirty museum exhibitions worldwide, including at the Whitney Museum of American Art, New York; Museo di Palazzo Grimani, Venice; and the Museo de Art Moderno, Mexico City.

In addition to a Guggenheim Fellowship, Judith Murray is the recipient of the American Academy of Arts and Letters Academy Award for Painting, and the National Endowment for the Arts Award. Murray was inducted into the National Academy in 2009, and has been a member of the American Abstract Artists since 1985.

Click this link to view: Judith Murray: Phases and Layers, a documentary filmed by Albert Maysles and Mark Ledzian, which follows the artist working on a large-scale painting.