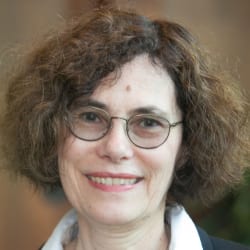 In her first book, Painters and Politics in the People's Republic of China, 1949-1979, Julia Andrews explored how the newly established Communist regime remolded the Chinese art world to serve its political and social agenda, and how artists of different generations and backgrounds responded to ideological pressures that none had foreseen. It was recognized for its combination of art historical, intellectual, and political analysis by award of the Joseph Levenson Prize of the Association of Asian Studies for the best book in 20th century Chinese studies. Her most recent book, Art of Modern China, co-authored with Kuiyi Shen, won the biennial Humanities Book Prize of the International Convention of Asia Scholars (ICAS) in 2013.

During her Guggenheim fellowship Andrews plans to finish a new manuscript, “China Roar: Painting Societies and the Creation of Modern Chinese Art, 1919-1949,” centered on the privately organized painting societies that proliferated in China’s cities between 1919 and 1949. Serving as alternative centers of cultural power, sometimes in the absence of a well-functioning government or effective structures of institutional support, these groups of artists, gathering as individuals, but conscious of a global artistic community, left a powerful intellectual, artistic, and pedagogical legacy that formed the core on which China’s modern art world and discourse of artistic modernity was built.

Andrews received her Ph.D. from the University of California at Berkeley, her M.A. from Harvard University, and her B.A. from Brown University. She lives in Columbus, Ohio, where she is Distinguished University Professor in History of Art at The Ohio State University. Among her curatorial projects have been the Guggenheim Museum’s groundbreaking exhibition, A Century in Crisis: Modernity and Tradition in the Art of Twentieth Century China, the first historical survey of modern Chinese art to be presented at an American museum, which showed in New York and Bilbao in 1998. Major support for her past research has come from the American Council of Learned Societies, the Chiang Ching-kuo Foundation, the Committee on Scholarly Communication with the PRC, the Durfee Foundation, Fulbright Senior Research Fellowship, the National Endowment for the Humanities, The Ohio State University, and the University of Michigan Center for Chinese Studies.