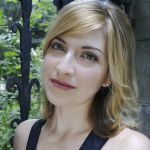 Julie Orringer is the author of two award-winning books of fiction: The Invisible Bridge (Knopf, 2010), a novel set in Europe during the Second World War, and How to Breathe Underwater (Knopf, 2003), a collection of short stories.  She is a graduate of Cornell University, the Iowa Writers’ Workshop, and the Stegner Fellowship Program at Stanford, and has also received fellowships from the National Endowment for the Arts, Dorothy and Lewis B. Cullman Center at the New York Public Library, and Radcliffe Institute for Advanced Study at Harvard, where she delivered the 2013 Julia S. Phelps Lecture in Art and the Humanities.  She has taught fiction writing at the University of Iowa, Stanford, Columbia, the University of Michigan, NYU, and Brooklyn College.

Orringer’s stories have appeared in the Paris Review, Yale Review, Washington Post, Ploughshares, and McSweeney’s, and have been anthologized in The Granta Book of the American Short Story and The Scribner Anthology of American Fiction.  Her novel and story collection were named New York Times Notable Books and were selected as Best Books of the Year by the San Francisco Chronicle, Boston Globe, Chicago Tribune, and Washington Post; they have been translated into fifteen languages, adapted for stage and radio, and designated as required reading for university students from Berkeley to Budapest.  Her novel The Invisible Bridge is currently being adapted for film by Daniel Ravasz, Lajos Koltai, and Branko Lustig.

Orringer lives in Brooklyn, New York, where she is now at work on a novel about Varian Fry, the New York journalist who went to Marseille in 1940 to save writers and artists blacklisted by the Gestapo.

Link to Orringer’s Julia Phelps Lecture, “Lies that Tell the Truth: Story and History in the Novel,” at the Radcliffe Institute for Advanced Study at Harvard, Dec. 3, 2013