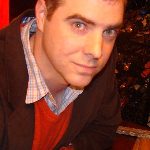 Justin McDaniel studies ghosts and manuscripts in Asia. After living and researching in South and Southeast Asia for many years as a translator, archivist, amulet collector, volunteer teacher, and Buddhist monk. He returned to the States and received his PhD from Harvard University’s Department of Sanskrit and Indian Studies in 2003. Presently he teaches Buddhism and Southeast Asian Studies at the University of Pennsylvania. His research foci include Lao, Thai, Pali and Sanskrit literature, Southeast Asian Buddhism, Japanese Buddhist architecture, ritual studies, manuscript studies, asceticism, the undead, and general phantasmagoria. His first book is on the history of Buddhist monastic education in Laos and Thailand, Gathering Leaves and Lifting Words (Seattle: University of Washington Press, 2008). It won the Benda Prize from the Association of Asian Studies for the best first book in Southeast Asian Studies. His second book, The Lovelorn Ghost and the Magical Monk (New York: Columbia University Press, 2011), is a study on material culture and ritual in Thai Buddhism. His recent publications appear in the Bulletin l’École Française d’Extrême-Orient (Études thématiques), Journal of the International Association of Buddhist Studies, Aséanie, Journal of Religion and Film, Material Religion, Manusya, and the Journal of the Siam Society, as well as contributions to collected articles on Buddhism and Modernity, Pali literature, Palm-leaf Manuscript research, and liturgical studies. He is the co-editor of the journals Buddhism Compass and Journal of Lao Studies, and is the Chair of the Southeast Asian Studies Council of the Association of Asian Studies. He has won several teaching and advising awards. In collaboration with colleagues at Penn, UC Riverside, and in Thailand, he has designed two websites: The Thai Digital Monastery Project and the Thai, Lao, Cambodia Studies Portal. His present project looks at the advent of Buddhist leisure (parks, museums, carnivals, film, comics, bird-watching, and collecting stuff) in Japan, Nepal, Thailand, Hong Kong, Singapore, and Laos.