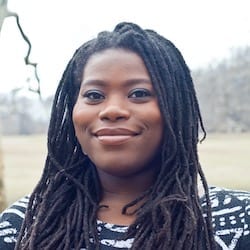 Kaitlyn Greenidge's debut novel is We Love You, Charlie Freeman (Algonquin Books), one of the New York Times Critics' Top 10 Books of 2016. Her writing has appeared in the Vogue, Glamour, the Wall Street Journal, Elle, Buzzfeed, Transition Magazine, Virginia Quarterly Review, The Believer, American Short Fiction and other places. She is the recipient of fellowships from the Whiting Foundation, the National Endowment for the Arts, the Radcliffe Institute for Advanced Study, and the Lewis Center for the Arts at Princeton University. She is currently Features Director at Harper’s Bazaar as well as a contributing writer for The New York Times. Her second novel, Libertie, is published by Algonquin Books.