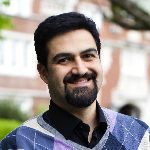 Kambiz GhaneaBassiri received his bachelor’s degree from Claremont McKenna College in Religious Studies and his master’s and doctoral degrees in the Study of Religion from Harvard University.  He is currently Associate Professor of Religion and Humanities at Reed College in Portland, Oregon. His scholarship and teaching focus on the study of religion, the social and intellectual history of early (8th-11th   centuries) and modern (19th-20th centuries) Islam in the Middle East, and American religious history. In his work he bridges these areas by inquiring into how Islamic beliefs and practices interact with specific historical contexts to shape both individual and communal lives. In line with this long-standing interest, his Guggenheim project proposes to examine mosques as historical sites of the material culture of Islamic beliefs and practices.

GhaneaBassiri’s most recent book is A History of Islam in America: From the New World to the New World Order (Cambridge, 2010). In 2006, he was named a Carnegie Scholar by the Carnegie Corporation of New York. He is currently a national scholar for the National Endowment for Humanities’ Bridging Cultures project on "Muslim Journeys."