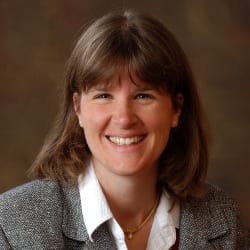 Karin Dahmen is Professor of Physics at Illinois. Her research is in theoretical condensed matter physics, investigating non-equilibrium systems with disorder. Her recent research uses ideas and tools from statistical physics to model the plastic deformation of solid materials.

Other areas of investigation range from high-temperature superconductors to Barkhausen noise in magnetic systems to biophysics – including the study of avalanches in neural networks, modeling stochastic gene-expression, and population dynamics in inhomogeneous environments.

She has served on national and international committees and boards, and was elected as member at large of the Division of Condensed Matter Physics (DCMP), and of the topical group of statistical and nonlinear physics (GSNP) of the American Physical Society (APS). She has served as a panel member of the Excellence Initiative in Germany.