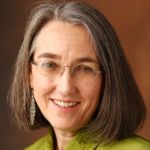 Kate Daniels is Professor of English and Director of Creative Writing at Vanderbilt University.  The author of four volumes of poetry (The White Wave and The Niobe Poems, from the Pitt Poetry Series, and Four Testimonies and A Walk in Victoria’s Secret, from LSU Press), she grew up outside of Richmond, Virginia, and was educated at the University of Virginia and Columbia University.  She was recently named the winner of the 2011 Hanes Award for Poetry by the Fellowship of Southern Writers.   Her poetry consistently explores aspects of gender-based and Southern working-class experience, and has been described as “distinct in the general history of southern poetry in its devotion to recovering the urban, working-class South, presenting a vision of the literal and cultural poverty” of such lives.

Daniels is particularly interested in connections between creative writing and illness, medicine, and healthcare, and the intersections of poetry and psychoanalysis, and has recently completed a prose work entitled Slow Fuse of the Possible: A Narrative of Poetry & Psychoanalysis.   She teaches writing at the Washington (D.C.) Center for Psychoanalysis’ New Directions program; has served as poet in residence at Duke University Medical Center and at Vanderbilt Medical Center; and has made presentations on poetry and psychoanalysis at a number of analytic centers and institutes.

Her Guggenheim project emanates from her interest in creativity, illness, and writing. Eastern State, a collection of poems, takes its title from the institution originally known as The Public Hospital for Persons of Insane and Disordered Minds, which was founded by the colonial legislature of Virginia in Williamsburg, in 1770.  Eastern State Hospital (as it is known today) was the first public institution for the care of the mentally ill in the United States.  It is still operating today.  Of the project, Daniels has said:  “Part of my interest in capturing both the form and content of this subject matter for my poems is connected with my teaching.   At Vanderbilt, I teach a course called Why Write: Perspectives on Literary Creativity, and another called The Art of Medical Writing.  Both of these classes, which I created, investigate the subject of poetic language, literary creativity, and the psychological health of creative writers.  At the same time, there is a personal dimension to my interest in writing about ESH and the language of its patients.  Several years ago, during the course of genealogical research on my father’s family (originally from the Tidewater region of Virginia), I discovered that several ancestors had been ‘inmates’ of ESH during the nineteenth century.  Instantly, I recalled a puzzlingly colloquial (and interchangeable) use of the terms 'Eastern State' and 'Williamsburg' from the lexicon of my childhood.  'Crazy' or unacceptable behavior in my family had elicited threats of being consigned to Eastern State (or Williamsburg). . . .

“As a poet who has always been interested in what could not or should not be said, I found myself intrigued at the way in which a suppressed family history had been outed by its inscription within unconsciously replicated, intergenerational language patterns.  I determined to make my investigations as a poet.  Thus, the collection Eastern State began to coalesce.  I see it as a series of poems that explore various intersections of language and self, literary self-narratives of mental illness, and something about space (confined space) and language, as well.”