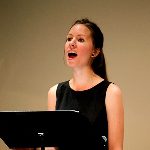 Kate Soper is a New York City–based composer and performer.  Her current compositional interests include the integration of drama and rhetoric into musical structure, the transformation of visceral gestures in and out of time, and the potential of the human voice to communicate abstractly (or not).  Her music, described as "exquisitely quirky" by the New York Times, has been commissioned by the American Composers Orchestra, Carnegie Hall, Alarm Will Sound, the Tanglewood Music Center, Dinosaur Annex, Yarn/Wire, the Flexible Orchestra, and Line Upon Line Percussion, among others.  In addition to a Guggenheim Fellowship, she has received awards from the Fromm Foundation, the American Academy of Arts and Letters, the Music Theory Society of New York State, and ASCAP.  A selection of her chamber music is available through Project Schott New York, a New York City–based publishing initiative.

As a singer and performer with experience in Western Classical and Indian Carnatik music, songwriting, improvisation, and experimental theatre, Kate performs frequently as a new music soprano.  She has performed U.S. and world premieres of works by composers such as Beat Furrer, George Lewis, Matthias Spahlinger, Eric Wubbels, and fellow Guggenheim Fellows Lew Spratlan (1980) and Alex Mincek (2012), and has appeared as a performer with the American Composers Orchestra, the Theatre of a Two Headed Calf, the SEM Ensemble, and Dinosaur Annex.  She has been featured as a composer/performer on the American Composers Orchestra's Orchestra Underground series, the New York City-based MATA and SONiC festivals, the Sacramento Festival of New Music, and Gaudeamus Muziekweek New York, and will appear with the Morningside Opera Company in her opera Siren in 2013.

Kate is Managing Director and vocalist for Wet Ink, a new music ensemble dedicated to seeking out adventurous music across aesthetic boundaries.  She is currently Adjunct Assistant Professor of Music at Columbia University and will be a fellow at the Radcliffe Institute for Advanced Study in 2012-13.

Recipient of the Virgil Thomson Award in Vocal Music by the American Academy of Arts and Letters, 2016