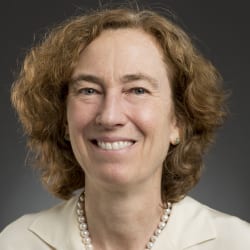 Since her days as an undergraduate Katharyne Mitchell has been interested in questions of xenophobia, citizenship, and the meaning and practices of belonging. These questions circle around the philosophical domain of ‘difference’, and the pragmatic sphere of ‘integration’. They often have a deeply spatial component to them, as who is rendered different, welcome, or unwelcome in any given society generally depends on historical and geographical context.

Mitchell’s book Crossing the Neoliberal Line: Pacific Rim Migration and the Metropolis explored these questions through an examination of the ways in which intense cultural struggles over the changing landscape and housing styles of late 20th century Vancouver, BC were linked with the arrival of wealthy Chinese immigrants from Hong Kong. Other work, published in several edited volumes and over 80 articles and book chapters, has investigated the role of education in immigrant integration and citizenship formation, as well as changing perspectives on multiculturalism and assimilation as national philosophies of integration. In addition to federal grants this research was made possible by the much-appreciated support of organizations such as the John D. and Catherine T. MacArthur Foundation, the Spencer Foundation, the Fulbright Foundation, and the Walter Chapin Simpson Center for the Humanities at the University of Washington.

In her time as a Guggenheim Fellow Mitchell will look at the nature of sanctuary and the role of faith-based movements in migration policy and human rights discourse in Europe. She believes the sanctuary movement can provide a lens onto the active working and reworking of democracy beyond the territorial framing of the nation-state. By focusing on the spaces and claims of sanctuary advocacy, is it possible to document new forms of democratic activism or ‘insurgent citizenship’, which challenge and transform normative state politics and the meanings of the political?

For more information about Mitchell’s current projects and publications please visit her website.