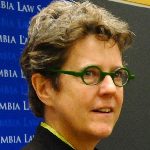 Katherine Franke is the Isidor and Seville Sulzbacher Professor of Law, and Director of the Center for Gender & Sexuality Law at Columbia Law School, where she teaches courses on Gender Justice, Queer Theory, Feminist Legal Theory, Critical Legal Thought, Gay Marriage, and The Law of Occupation. She also serves on the Executive Committee of Columbia’s Institute for Research on Women and Gender and works closely with Columbia’s Center for Palestine Studies. She is among the nation’s leading scholars working at the intersections of feminist, queer, and critical race theory. Among her recent publications are Dating the State: The Moral Hazards of Winning Gay Rights, Public Sex, Same-Sex Marriage, and the Afterlife of Homophobia, and Longing for Loving. Her book in progress explores the curious role of the right to marry in larger civil-rights struggles, comparing African Americans in the immediate post–Civil War period with same-sex couples today.

In addition to her scholarly research she has conducted workshops for Palestinian women lawyers in Ramallah, Palestine, and writes regularly for a more popular audience in the Gender & Sexuality Law Blog and is on the Board of Directors of the Center for Constitutional Rights.