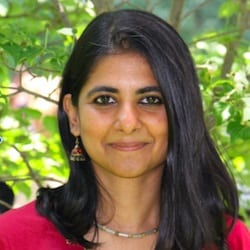 Kavita Ramanan is the Roland George Dwight Richardson University Professor of Applied Mathematics at Brown University. She is an interdisciplinary researcher whose work transcends boundaries and combines tools from a broad array of fields, including discrete probability, stochastic analysis and partial differential equations. She has introduced novel perspectives and developed innovative mathematical techniques for the analysis of stochastic networks and interacting particle systems, which model phenomena in a variety of fields including engineering, statistical physics and neuroscience. She has also made fundamental contributions to the study of large deviations or rare events, with applications to asymptotic convex geometry and high-dimensional statistics. Her research has been recognized by the Erlang Prize from the Applied Probability Society, a Medallion from the Institute for Mathematical Statistics, and a Simons Fellowship. She is an elected fellow of the American Association for the Advancement of Science, American Mathematical Society, Institute for Operations Research and the Management Sciences, Institute for Mathematical Statistics, and the Society for Industrial and Applied Mathematics. She is also passionate about math outreach. She founded the Math CoOp, served as consultant and narrator for the film “Srinivasa Ramanujan: The Mathematician and his Legacy”, and acts as corresponding editor for the Mathematics Magazine Bhāvāna. Photo Credit: T.J. Ravishankar