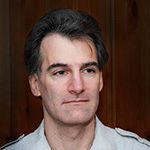 A neuroscientist by training, Ken Catania has spent much of his career investigating the unusual brains and behaviors of specialized animals.  These have included star-nosed moles, tentacled snakes, water shrews, alligators, crocodiles, and most recently electric eels.   Most of these species are predators that have evolved senses and weapons to find and overcome their elusive prey.  But this has created an arms race, pushing prey to become faster and more efficient at escape and deception.  Controlling both sides of this struggle are unique brains that mediate senses outside the realm of human experience.  These species teach us many principles about brain function because they have honed special abilities – such as detecting electric fields, feeling microscopic textures, hearing and probing with ultrasound, sniffing in stereo, predicting movements, or making decisions for attack or escape in fractions of a second. “Beyond teaching us about special senses and brain evolution, there is unappreciated beauty and elegance in the behaviors and diverse forms of these extraordinary animals.  I feel very fortunate to have a career where I can study and reveal, sometimes for the first time, the astounding abilities of the animals.  My privilege and challenge as a Guggenheim Fellow is to showcase these unique species in a book project that will include compelling imagery, videos, and the science behind the stories.” A MacArthur Fellow and recent recipient of the Pradel Award in Neurosciences from the National Academy of Sciences, Catania is currently a Stevenson Professor of Biological Sciences at Vanderbilt University in Nashville, Tennessee.