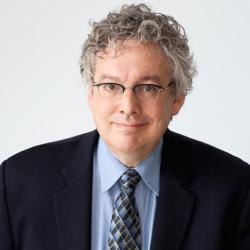 Kevin Baker is a novelist, historian, and journalist, who has been writing professionally since the age of 13, when his mother had to teach him to type so he could keep a job covering high school sports for the The Gloucester Daily Times, in Gloucester, Massachusetts. He has lived and worked in New York City since entering Columbia University there (BA, 1980).

Baker is the author of five novels, including The Big Crowd (2011), Strivers Row (2006), Dreamland (1999) and Paradise Alley (2002), the last two of which were named New York Times notable books of the year. Paradise Alley also received the American Book Award, and the James Fenimore Cooper Award from the Society of American Historians. He is, as well, the author of the histories, America, The Story of Us (2010), and America the Ingenious, (2016), and recently completed a history of New York City baseball. He has even had the effrontery to co-author a graphic novel, Luna Park (2009), despite a conspicuous inability to draw so much as a line.

Other endeavors have included writing columns for American Heritage and The New York Observer, and serving as a contributing editor at Harper’s Magazine. He has written on history, politics, books, travel, and sports for many publications, including The New York Times, The New Republic, The Village Voice, Politico, The Washington Post, American History, and Military History, and has contributed to fiction and nonfiction collections, and documentaries.

In a time of intense national division, Baker’s history, The Invention of Paradise, proposes to explore another period of conflict and upheaval, the years between the First World War and America’s entry into the second one. It is his contention that these decades constituted an American Renaissance, a time of tremendous creativity and innovation in every field of human endeavor, that resonates to this day. It was the era when our music, painting, design, architecture, literature, and dance first gained a deep and continuing influence on the rest of the world, and when the American version of the social welfare state was created.

The Invention of Paradise proposes to delve as well into those problems and conflicts that were not resolved; to look at the alternative communities built during the period by African Americans, women, and gay people; and at the culture of backlash that also took root in at this time, in fundamentalist Christianity, the business establishment, and the isolationist movement.