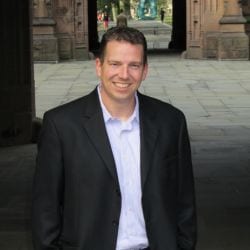 As a professor of history at Princeton University, Kevin M. Kruse studies the political, social, and urban/suburban history of 20th-century America. Focused on conflicts over race, rights, and religion, he has particular interests in segregation and the civil rights movement, the rise of religious nationalism and the making of modern conservatism.

His first book, White Flight: Atlanta and the Making of Modern Conservatism (2005), won prizes including the 2007 Francis B. Simkins Award from the Southern Historical Association (for the best first book in Southern history, 2005-2006) and the 2007 Best Book Award in Urban Politics from the American Political Science Association. His second monograph, One Nation Under God: How Corporate America Invented Christian America (2015), examined the rise of American religious nationalism in the mid-twentieth century and its legacies in American political and religious life. (Kruse discussed the book on NPR’s Fresh Air with Terry Gross.) His third book, Fault Lines: A History of America Since 1974 (2019), co-authored with Julian Zelizer, traced the origins of the divided states of contemporary America, a nation increasingly riven by a fractured media landscape, stark political partisanship and deep social divisions along lines of race, class, gender and sexuality. In addition to these works, Kruse has also served as the co-editor of three collections: The New Suburban History (2006), with Thomas J. Sugrue; Spaces of the Modern City (2008), with Gyan Prakash; and Fog of War: The Second World War and the Civil Rights Movement (2012) with Stephen Tuck. He regularly writes op-eds and essays for the general public and is also active on Twitter.

With the support of the Guggenheim Foundation, Kruse will focus on the archival research for his next book, The Division: John Doar, the Justice Department, and the Civil Rights Movement (contracted to Basic Books). The point man for civil rights for the Kennedy and Johnson administrations, Doar was a vital actor in countless crisis moments in the civil rights movement — personally confronting segregationists at Ole Miss and the University of Alabama, putting Klansmen on trial for the murders of civil rights workers (including the famous “Mississippi Burning” murders), helping draft the Civil Rights Act of 1964 and the Voting Rights Act of 1965, leading the way in the Selma-to-Montgomery March, etc. The previously untapped papers of John Doar reveal new details about these milestones, but also promise to transform the ways in which scholars conceptualize the civil rights era as a whole. Kruse anticipates that his findings will challenge the conventional wisdom on federal, state and local relations during the civil rights revolution and complicate our understanding of the partisan realignment over racial issues as well.