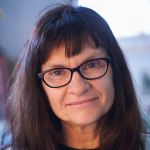 Kim Abeles' installations and community projects cross disciplines and media to explore biography, geography, and environment. Experimentation with unusual materials and new processes are central to her art. She has created artwork in conjunction with a unique range of collaborators such as the Bureau of Automotive Repair, Santa Monica Bay Restoration Project, California Science Center, natural history museums in California and Colorado, and the Lakota Indians of South Dakota. Her work has involved specialists in diverse fields of study and community groups of all ages. With an open mind to modes of visual art, she has dealt with many subjects, including the urban environment, feminism, aging, HIV/AIDS, labor, domestic violence, and collective memory. In 1987, she innovated a method to create images from the smog in the air, and Smog Collectors brought her work to national and international attention, including mainstream sources such as Newsweek, National Public Radio, and The Wall Street Journal.

She has exhibited in twenty-two countries, including large-scale installations in Vietnam, Thailand, Czech Republic, England, China, and South Korea. She represented the U.S. for the Fotografie Biennale Rotterdam and Cultural Centre of Berchem in Antwerp.  A midcareer survey of her work curated by Karen Moss for the Santa Monica Museum, entitled Kim Abeles: Encyclopedia Persona A-Z, toured the United States and South America. The Fellows of Contemporary Art sponsored the exhibition, and the South American tour was presented by the United States Information Agency.  Abeles has received fellowships and awards from the J. Paul Getty Trust Fund for the Visual Arts, California Community Foundation, Durfee Foundation, Pollack-Krasner Foundation, Los Angeles Cultural Affairs Department, and California Arts Council.

Her work has been exhibited at the National Center for Atmospheric Research; Museum of Arts and Design in New York; National Museum of Fine Arts in Santiago, Chile; Museum of Modern Art, Rio de Janeiro, Brazil; Laband Gallery at Loyola Marymount University; and Intersection for the Arts in San Francisco, among other venues. Abeles’ journals, artist's books, and process documents are archived at the Center for Art + Environment, Nevada Museum of Art. Abeles has lived and worked in downtown Los Angeles since 1980.