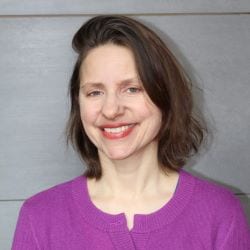 Kim Phillips-Fein is a historian of twentieth-century American political, economic and labor history. She is the author of Invisible Hands: The Businessmen's Crusade Against the New Deal (W.W. Norton, 2010) and Fear City: New York's Fiscal Crisis and the Rise of Austerity Politics (Metropolitan Books, 2017). Her work deals with questions about the origins and development of the modern conservative movement, the rightward shift of the United States in the late twentieth century, the politics of economic ideas and the relationship between economic and political power. Her current project addresses the longstanding efforts on the part of people with access to money and power to defend high levels of economic inequality and explores the varied ways these ideas have been contested over time. She is especially interested in the history of New York City. She is a professor at the Gallatin School of Individualized Study and the History Department of the College of Arts and Sciences at New York University. Photo Credit: NYU Gallatin