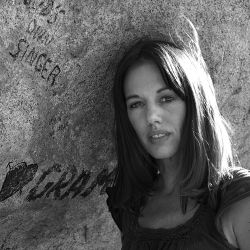 Kim Stringfellow is an artist and educator residing in Joshua Tree, California. She teaches photography and multimedia courses at San Diego State University as an associate professor in the School of Art + Design. She received her MFA in Art and Technology from the School of the Art Institute of Chicago in 2000.

Stringfellow’s practice bridges cultural geography, environmental journalism and experimental documentary into creative, socially engaged transmedia experiences. Her research explores the cultural landscape and history of place, often addressing environmental repercussions of human interaction and occupation within these spaces. By focusing on particular subjects, communities or regions she attempts to foster a discussion of complex, interrelated issues for each site while attempting to expose human values and political agendas that form our collective understanding of these places. These projects, which combine writing, photography, audio, video, installation, mapping and community engagement are designed to create awareness and educate her audience through a varied multimedia format.

Stringfellow’s projects have been commissioned and funded by leading organizations including Cal Humanities, Creative Work Fund, Graham Foundation for Advanced Studies in the Fine Arts, Los Angeles County Arts Commission and the Seattle Arts Commission. She is a 2015 Guggenheim Fellow in Photography and the 2012 recipient of the Theo Westenberger Award for Artistic Excellence. The award honors the achievements of contemporary women whose work in photography, film, and new media transforms how we see the American West. To coincide with her the receiving this award The Autry is exhibiting Jackrabbit Homestead at Irene Helen Jones Parks Gallery of Art from September 13, 2014 - August 23, 2015.

Stringfellow’s work has been exhibited at the International Center for Photography (ICP), Los Angeles County Museum of Art (LACMA), Los Angeles Contemporary Exhibitions (LACE), The Autry National Center, The Nevada Museum of Art, The John Michael Kohler Arts Center, Gagosian Madison Avenue, UC Berkeley’s Graduate School of Journalism, UC Riverside’s Culver Arts Center, and The Santa Fe Art Institute among others. Internationally, her work has been included in exhibits at Cubitt, London, UK; the Inter-Society for the Electronic Arts (ISEA) in Tallinn, Estonia; and at the José Martí National Library in Havana, Cuba.

She has received multiple grants from the California Council for the Humanities. Acting as project director for The Mojave Project, she received the prestigious California Documentary Project (CDP) Production Grant for New Media from Cal Humanities in 2015 and a CDP Research and Development Grant for this project in 2014. Stringfellow is a co-editor for ARID: A Journal of Desert, Art and Ecology and a regular contributor for KCET Artbound. Follow these links for more information:

There it is - Take it

Greetings from the Salton Sea