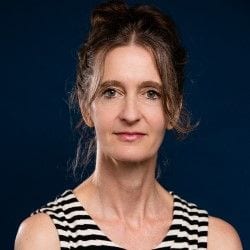 Choreographer, performer, educator Kimberly Bartosik creates viscerally provocative, ferociously intimate choreographic projects that are built upon the development of a virtuosic movement language, rigorous conceptual explorations, and the creation of highly theatricalized environments. Her work, which is deeply informed by literature and cinema, dramatically illuminates the ephemeral nature of performance.

Kimberly is a 2019-20 Center for Ballet and the Arts @ NYU Virginia B. Toulmin Women Leaders in Dance Fellow where she will create The Encounter, a project for 12-15 year old dancers aspiring toward careers in ballet. She is a 2017 National Dance Project (NDP) Production & Touring Grant and Community Engagement Fund recipient, a program of the New England Foundation for the Arts. In 2017 and 2010 she was awarded a MAP Fund grant. Kimberly has also received support for her choreographic work from the Creative Arts Initiative (CAI), Jerome Foundation; FUSED (French-US Exchange in Dance), a program of the New England Foundation for the Arts in partnership with The Cultural Services of the French Embassy and the French American Cultural Exchange; Mid-Atlantic Arts Foundation, USArtists International (2019, 2013); New York Foundation for the Arts, Building Up Infrastructure Levels for Dance (BUILD); American Dance Abroad; New Music USA, Live Music for Dance; and Foundation for Contemporary Arts, Grants to Artists and Emergency Grants.

In 2017 Kimberly was a Dancing Laboratory Residency Artist at the National Center for Choreography at the University of Akron and a Bogliasco Foundation Fellow. She is a 2019 and 2015 Merce Cunningham Fellow; a 2016 Gibney Dance DiP Residence Artist.; and a recipient of an ART, a Capacity-Building grant through Pentacle. In 2018, Kimberly made her curatorial debut as part of DoublePlus at Gibney.

Kimberly was a member of the Merce Cunningham Dance Company for 9 years and received a Bessie Award for Exceptional Artistry in his work. She received her BFA in Dance from North Carolina School of the Arts, and MA in 20th Century Art and Art Criticism from The Graduate Faculty of Political and Social Research of the New School University. Kimberly was a 2016 Princeton Fellowship Finalist, and has been a guest artist/faculty at Princeton University, The Juilliard School, Rutgers University, Bates College, University of North Carolina School for the Arts, Arizona State University’s Hergberger Institute for Design and the Arts, SUNY/Purchase, Colorado College, and University of Buffalo.

Through my current choreographic work, I carve out a space for criticism and compassion while tenderly and violently etching away at some deeply distressing threads of our society. I use the body—in all its physical and emotional extremes—inviting audiences to think, feel, and reflect on their place within their complicated existence. Recently my process has focused on rigorous physical research with virtuosic performers towards achieving intense energetic states, which, pushed to an extreme, result in a breaking down of form, leaving the body in a vulnerable, deeply human state. This play with power and vulnerability has become the core of my process.