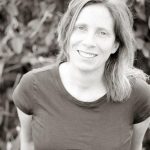 Kimberly Johnson is the author of two collections of poetry, Leviathan with a Hook (Persea Books, 2002) and A Metaphorical God (Persea Books, 2008). In 2009, Penguin Classics published her translation of Virgil’s Georgics, under the title The Georgics: A Poem of the Land. Her poetry, translations, and scholarly essays have appeared widely in publications including The New Yorker, Slate, Ploughshares, and Modern Philology.

With Michael C. Schoenfeldt and Richard Strier, Johnson has edited a collection of essays on Renaissance literature, Divisions on a Ground. She also served as the editor of a fully searchable online collection of John Donne’s complete sermons.

She has received grants and awards from the National Endowment for the Arts, the Utah Arts Council, and the Mellon Foundation. Johnson holds an M.A. from the Johns Hopkins Writing Seminars, an M.F.A. from the Iowa Writers’ Workshop, and a Ph.D. in Renaissance Literature from the University of California at Berkeley.

Kimberly Johnson lives in Salt Lake City, Utah. She teaches Renaissance literature and creative writing at BYU. With the support of the Guggenheim Fellowship, she intends to complete her next collection of poetry.