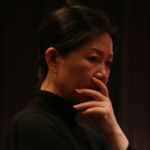 Kimsooja (born in Daegu, Korea), based in New York, Paris, and Seoul, came to international fame in the 1990s following a P.S.1 residency in New York. This period paved the way for some of her most famous pieces to date: Bottari, Cities on the Move—2727km Bottari Truck and A Needle Woman, shown in numerous exhibitions and biennales around the world. Bottari Truck consisted of a truck loaded with bottari, the Korean word for bundle, which traveled throughout Korea for eleven days. The bundles were made of bed covers—an object accompanying the key moments of our existence from birth, marriage, illness, to death.

Following the Bottari Truck project, Kimsooja started a video performance called A Needle Woman, showing the artist from the back standing in the middle of main thoroughfares in various cities throughout the world. This work further developed the concept of sewing towards abstraction, bringing together people, nature, cultures, and civilizations. In a subtle but powerful way, Kimsooja, who works primarily in video, performance, installation, and photography, has advanced to a premier artist in her discipline, taking up sensitive issues like identity, migration, gender, or sociopolitical and cultural issues, integrating parallelly to formalistic problems in contemporary art.

Kimsooja’s work combines performance, video, and installation, addressing issues of the displaced self, questioning conditions of humanity. Kimsooja constantly experiments and brings together with a deepening inquiry a conceptual, logical, and structural investigation of painting, sculpture, performance, video, and installation through immobility and non-doing that inverts the notion of the artist as the predominant actor and maker.  Besides taking us on her journey, Kimsooja’s work is an invitation to question our existence, and the major challenges we are facing in this era.

A large-scale retrospective exhibition is scheduled at Vancouver Art Gallery in 2013.