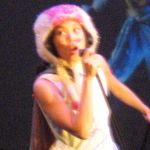 The recipient of five Choreographer Fellowships from the National Endowment for the Arts and two from the New York Foundation for the Arts, Koosil-ja is an innovative dancer and choreographer who is always seeking new means of expression.

Koosil-ja moved to New York City in 1981 to study dance with Merce Cunningham, and later was a member of the Wendy Perron Dance Company (1987-89). Her own work has been presented in such New York City venues as the 92nd Street Y Dance Center, The Kitchen, La MaMa E.T.C., Aaron Davis Hall, P.S. 122, the Performing Garage, Danspace Project at St. Mark’s Church, Lincoln Center Out-of-Doors, Central Park SummerStage, Whitney Museum of American Art at Altria, and LMCC’s Swing Space.  National venues that have featured her work include Jacob’s Pillow Dance Festival, the Contemporary Arts Center, Dance Umbrella, Diverseworks, Jumpstart, Walker Arts Center, American Dance Festival, and the University of Wisconsin. She has also toured to various locations in The Netherlands and Germany. In addition to her own projects, Koosil-ja has worked with the Wooster Group.

In 2004, she received a BESSIE (New York Dance and Performance) Award in choreography for the creation of mech[a]OUTPUT and deadmandancing EXCESS.

Dance Without Bodies, one of her most recent works, premiered at The Kitchen in 2006 and travelled to Berlin later in the year. Deborah Jowitt, critic for The Village Voice, heralded the piece as "Profoundly moving . . . an exciting, provocative, sometimes hilarious illustration of the body as a vessel for nearly unprocessed data." New York Times critic John Rockwell was equally impressed: "The dancing was vigorous and energetic, and fascinating to check against the three video offerings." Her latest live cinema project, Blocks of Continuality/Movement-Live Cinema, premiered in New York in the fall of 2008.

Koosil-ja studies Body Without Organs, a key concept in the philosophy of Gilles Deleuze and Felix Guattari.  As she explains, this concept promotes the ideas that the self can be considered an arrangement in a constant state of process.  This arrangement is a flow that connects with other flows, each into the others. The performance method "Live Processing" was created as a result of the study as well as her experience performing with the Wooster Group.  Live Processing and the dancers become a flow that operates on the cutting edge of movement, decoding and ‘deterritorializing" to acieve a new movement paradigm.

For over forty years, Koosil-ja contends, modern dance has been centered on either classic modern exposition, or purely abstract improvisation.  Her exploration of Body Without Organs, developed more recently than those traditions, offers a new route for artistic development.  By boldy eschewing the restrictions of these two modern dance traditions (while respecitng the lessons learned from each), she seeks answers for the question "What are the foundations for the creation of the new?" Combining elements of philosophy, body, and digital technology, Dance Without Body will separate out and dissect the componient processes of embodied performance, allowing for a new creative assemblage ripe for digital interface and experimentation.