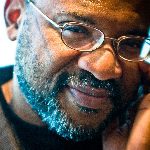 Ghanaian-born Jamaican poet Kwame Dawes is the award-winning author of sixteen books of poetry (most recently, Wheels, 2011) and numerous books of fiction, nonfiction, criticism, and drama and has edited nine anthologies. He is the Glenna Luschei Editor of Prairie Schooner, and a Chancellor’s Professor of English at the University of Nebraska, and Associate Poetry Editor for Peepal Tree Press in the U.K.   Kwame Dawes also teaches in the Pacific MFA Writing program and is a faculty member of Cave Canem.  Dawes’ book, Duppy Conqueror: New and Selected Poems, will be published by Copper Canyon in 2013.  Dawes’ pioneering work as poet/journalist has led to several award-winning multimedia pieces covering a range of themes including HIV AIDS (Live Hope Love, “Voices of Haiti), inner city blight (Ashes) and the legacy of Jim Crow (Wisteria: Twilight Songs from the Swamp Country). Dawes’ many awards include the Forward Poetry Prize, the Hollis Summers Poetry Prize, the Silver Musgrave Medal, the Emmy, the Pushcart Prize, the Hurston/ Wright Legacy Award, and most recently, the Poets and Writers Barnes and Nobles Writers for Writers Award.  Kwame Dawes is the programming director of the Calabash International Literary Festival.  He is currently working on a extended sequence of poems that are inspired by and that dialog with the plays of August Wilson titled August: A Quintet.

Web links to some of Kwame Dawe's work on the internet:
Emmy-winning website on HIV/AIDS in Jamaica
School House video clip
Mothers of Mothers video clip