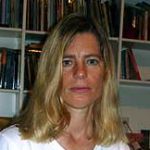 Appointed for poetry, Larissa Szporluk has been teaching full-time at Bowling Green State University since 2000 and is now an associate professor of Creative Writing and Literature. In 2005, she was a visiting professor at Cornell University. Since the publication of her chapbook Prowler’s Universe in Graywolf Press’s Take Three Series (1996), she has gone on to publish four books of poetry: Dark Sky Question, winner of the Barnard Poetry Prize (Beacon Press, 1998), Isolato, winner of the Iowa Poetry Prize (University of Iowa Press, 2000),  The Wind, Master Cherry, The Wind (Alice James Books, 2003) and Embryos and Idiots (Tupelo Press, 2007). Her work is included in Best American Poetry 1991 and 2001, New American Voices, 20th-Century American Poetry, Contemporary Poetry in the U.S., and numerous other anthologies.

In 2003, Ms. Szporluk received a National Endowment for the Arts grant as well as an Ohio Arts Council grant. In 2005-06, she participated as one of three poets in the Georgia Literary Circuit tour, giving poetry readings at numerous colleges and universities throughout the state of Georgia. She was also an invited reader at the 2006 Belgrade International Book Fair where she gave a talk on the imagination in contemporary American poetry and read her work.