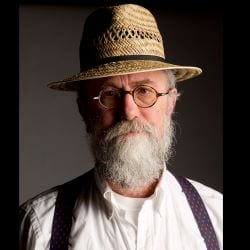 Larry Towell's business card reads 'Human Being'. Experience as a poet and folk musician has done much to shape his personal style. He has been associated with Magnum Photos since the 1980's and has been a full member for twenty-seven years. Larry is the author of fourteen books and the recipient of dozens of awards including the Prix Nadar, the Eugene Smith and the Oscar Barnack. His last monograph Afghanistan (Aperture, 2014) was listed as one of the best photo books of the year by The New Yorker, Photo District News and TIME Magazine. Larry is also a gifted writer and musician and is known for his innovative live performances. He is the author of four music and poetry CDs, as well as Indecisive Moments (2008), an award-winning short film. His work focuses on displacement and on what happens to people when they lose their land. More of Larry's work can be seen on the Magnum Photos website. Photo Credit: Brent Foster