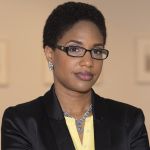 LaToya Ruby Frazier has been described as “an artist on a mission with a prophetic voice” who has a “preternaturally mature body of work,” by The Village Voice and New York Times.

Through photography, performance, and video Frazier uses the conventions of social documentary to probe and upend traditional narratives of urban growth and the triumph of industry. Exposing the underbelly of corporate practices—rapid deindustrialization and outsourcing, environmental negligence, and inner-city gentrification—Frazier’s work examines the crises of postindustrial communities and class divisions wrought by capital.

Her work is informed by late nineteenth- and early twentieth-century modes of representation in documentary practice. Through a collaborative effort with her family and community residents Frazier’s works emphasize the importance of cultural memory and shed light on invisible realities.

Her 2013 solo exhibitions include Born By a River, at the Seattle Art Museum, where she received the 2013 Gwendolyn Knight & Jacob Lawrence Prize; Witness, at the Contemporary Art Museum Houston, which traveled to the Institute for Contemporary Art/ Boston; and A Haunted Capital, at the Brooklyn Museum of Art. She has also participated in a number of group exhibitions, among them the 2013 Istanbul Biennial Mom and I Barbarian?; the 2012 Whitney Biennial at the Whitney Museum of American Art; and in 2011 the Incheon Korea Biennale, Aperture Foundation Green Cart Commission: Moveable Feast at Museum of the City of New York, Video Studio: Changing Same at The Studio Museum in Harlem, the Pittsburgh Biennial, Gertrude’s s/lot at the Andy Warhol Museum, 2010 Greater New York MoMA P.S.1, and the 2009 New Museum triennial Younger Than Jesus.

Frazier is the 2014 Guna S. Mundheim Visual Arts Fellow at the American Academy in Berlin where she will complete her first book The Notion of Family, which will be published by Aperture Foundation in 2014. This book will tell the story of economic globalization and the decline of manufacturing through the bodies of three generations of African American women.

All of my photographs are created in Braddock, Pennsylvania, a historic steel mill town of America’s Industrial period. It is home to Andrew Carnegie’s first steel mill, The Edgar Thomson Works, established in 1872. Grandma Ruby, Mom, and myself grew up in significantly different social and economic climates in Braddock. Grandma Ruby witnessed Braddock’s prosperous days of department stores, theaters, and restaurants. Mom witnessed the steel mills close, white flight, and disinvestment. I witnessed the War on Drugs decimate my family and community. Between our three generations we not only witnessed but experienced and internalized the end of industrialization and rise of gentrification.