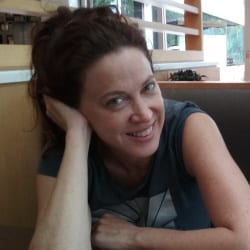 When The Lingerie Show garnered first prize at the Oscar accredited Florida Film Festival, as well as a “Best Made in Chicago” award from The Chicago Underground Film Festival, Best Animation at the Madrid International Film Festival and Special Mention from the Los Angeles Film Festival for excellence in animation, the arc of Laura Harrison’s work had already made a major shift. She had spent the past twenty-five years as a painter—showing with Mario Diacono Gallery and Lamontagne Gallery in Boston among others--and only the last six of those years as an experimental animator. Her eclectic, propulsive story telling style--derived in part from her painterly hand and narratives dealing with difficult subjects--was novel in its tactility and forcefulness, offering entirely original content. Granted the Boit Award from the School of the Museum of Fine Arts Boston where she received an MFA in painting and animation in 2012, she also received a Macdowell Fellowship that same year. Ms. Harrison had completed three short experimental animations by the time she received a New Artist’s Society Scholarship in 2014 from The School of the Art Institute of Chicago where she was able to work on a more ambitious piece, Little Red Giant, The Monster That I Was, and complete a second MFA in Film, Video, New Media and Animation.

Vimeo: Little Red Giant - The Monster That I Was