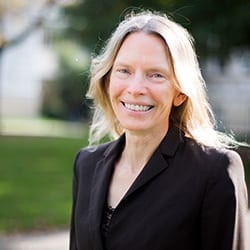 Trained as a neuroscientist and literary scholar, Laura Otis studies the ways that literature and science intersect. In her research and teaching at Emory University, she compares scientific and literary writers’ use of language, especially their creative metaphors to describe memory, identity, emotion, and thought. Otis has earned a BS in Biochemistry, an MA in Neuroscience, an MA and a PhD in Comparative Literature, and an MFA in Fiction. She is the author of the academic books Banned Emotions, Rethinking Thought, Müller’s Lab, Networking, Membranes, and Organic Memory, and the novels Clean, Refiner’s Fire, Lacking in Substance, The Memory Hive, and The Tantalus Letters. In 2000, she was awarded a MacArthur fellowship for creativity, and she has served as President of the Society for Literature, Science, and the Arts. Recently she has worked as a guest scholar in Berlin with the History of Emotions group at the Max Planck Institute for Human Development. Her current research project investigates the ways that fiction-writers cue readers to combine senses in their imaginations, with the aim of helping neuroscientists to benefit from literary knowledge. See her writing on Psychology Today here.