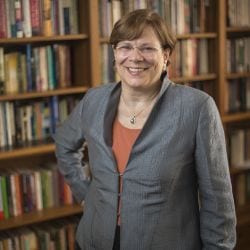 A leading scholar of the history of empires and law, Lauren Benton began her career as an anthropologist conducting ethnographic fieldwork in Spanish factories and Latin American cities. Her first book, Invisible Factories, analyzed sweatshop labor and structural change in the electronics and shoe industries in Spain.

Benton then shifted her research focus to world history. Developing a novel perspective, Law and Colonial Cultures: Legal Regimes in World History, 1400-1900 linked jurisdictional conflicts in empires to changes in world and regional orders. The book received the Bentley Prize from the World Historical Association, the James Willard Hurst Book Prize from the Law and Society Association, and the PEWS Book Award from the American Sociological Association. Benton’s third book, A Search for Sovereignty: Geography and European Empires, 1400-1900, broke new ground in the study of space and sovereignty in empires. Most recently, Rage for Order: The British Empire and the Origins of International Law, 1800-1850, coauthored with Lisa Ford, traces the British Empire’s vast project to make the imperial constitution a legal framework for the world. Benton has also written dozens of articles and coedited three books, including two on the comparative legal history of empires: Empires and Legal Pluralism (coedited with Richard Ross) and Protection and Empires (coedited with Adam Clulow and Bain Attwood).

In January 2019, Lauren Benton joined a distinguished roster that includes Natalie Zemon Davis, Sir Christopher Bayly, and Jean-Paul Sartre when she received the Toynbee Prize, awarded biannually to scholars who have made significant contributions to world history.

While pursuing her scholarly work, Lauren Benton has served as dean for humanities and dean of the graduate school at NYU and as dean of arts and science at Vanderbilt, where she is Nelson O. Tyrone Professor of History and Professor of Law. In November, 2019, Benton begins a two-year term as president of the American Society for Legal History.