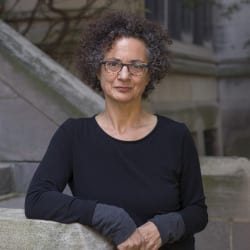 I have been working on the relation among aesthetics, attachment, and affect since The Anatomy of National Fantasy (1991), through The Female Complaint (2008), and The Queen of America Goes to Washington City (1997). This national sentimentality trilogy asked what the relation was between personal attachments and those that bind persons to collective infrastructures such as citizenship, the nation form, and good life racial, sexual and economic normativity. This was less a question of how individual psychologies find objects for projection and identification and more a question of how people sustain worlds through attachments in many registers, thus producing the social and the political as intimate spaces—thus my emphasis on fantasy as a sensual and conceptual process. Cruel Optimism (2011) turned the question of collectively held objects/norms into an analysis of what happens when sustaining fantasies no longer have a world to attach to. These concerns focused strongly on scenes of pain and collective crisis that shook up confidence in conventional genres of living. My Guggenheim project, Matter of Flatness, approaches these questions of attachment from a different perspective. Scholars of political emotion and publics need better tools to think about multiple registers of the social/political, rather than presuming that dramatic intensities and orchestrated events are of greater significance than diffused, unaccounted-for, loosely organized, comic, or episodic forms of life. Each chapter of this project provides different ways to address scenes that appear flattened or ordinary: where what looks like detachment is also a way of being in relation; where what looks like nothing happens may assume the form of the event over time; where what looks like aversion might express interest after all; where atmospheres that seem ephemeral and only obliquely available to narrative might carry the weight of historical process and social relations nonetheless. This may seem like a formalist investigation, but preliminary work on the three main chapters—on deadpan, dissociation, and the dégagé —captures the many affective effects of inequalities on the sensorium, as well as the structurally diverse consequences of affect that shows up to withhold. Obituary