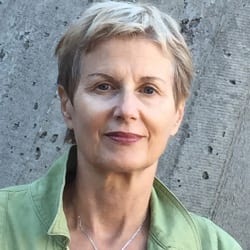 Laurie Fendrich is an abstract painter who lives and works in New York, and is a professor emerita of fine arts at Hofstra University. She has had several solo exhibitions, both nationally and in New York. In 2010, her paintings and drawings were the subject of a twenty-year retrospective at the Ruth Chandler Williamson Art Gallery at Scripps College in Claremont, CA, which traveled to the Montana Art Museum. Leah Ollman, writing in Art in America, observed that her work seeks to find a “balance between presumed opposites: intellect and emotion, freedom and limitation, harmonic stasis and frisky dynamism.” Ms. Fendrich’s work has been reviewed in several publications, including The New York Times, Artforum, ARTnews, Art in America, ARTS Magazine, The New York Sun, The New York Observer and Partisan Magazine. Her essays on the role of art and artists in society, on the meaning of painting, as well as reflections on other cultural issues, appear regularly in The Chronicle of Higher Education.