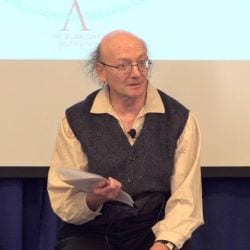 Lawrence Rosenwald is the Anne Pierce Rogers Professor of English at Wellesley College, where he has been teaching since 1980.  He has published work on diaries, translation, literary multilingualism, and the relations between literature and war resistance;  his current large project is an attempt to define pacifist criticism, and his most recent large publication is War No More, an anthology of American antiwar and peace writing for the Library of America (Some of his essays on these topics are at the War Tax Resistance Speakers Bureau, and an account of War No More is at the book's page at the Library of America. He has also published literary and scholarly translations from German, French, and Yiddish, most notably Scripture and Translation, Martin Buber and Franz Rosenzweig's account of their revolutionary Bible translation.  He has written and performed some fifty verse scripts for early music theater, often for the Amherst Early Music Festival but also for such ensembles as Artek, Les Délices, the Texas Early Music Project, and Voices of Music. Photo Credit: Albright Institute, Wellesley College